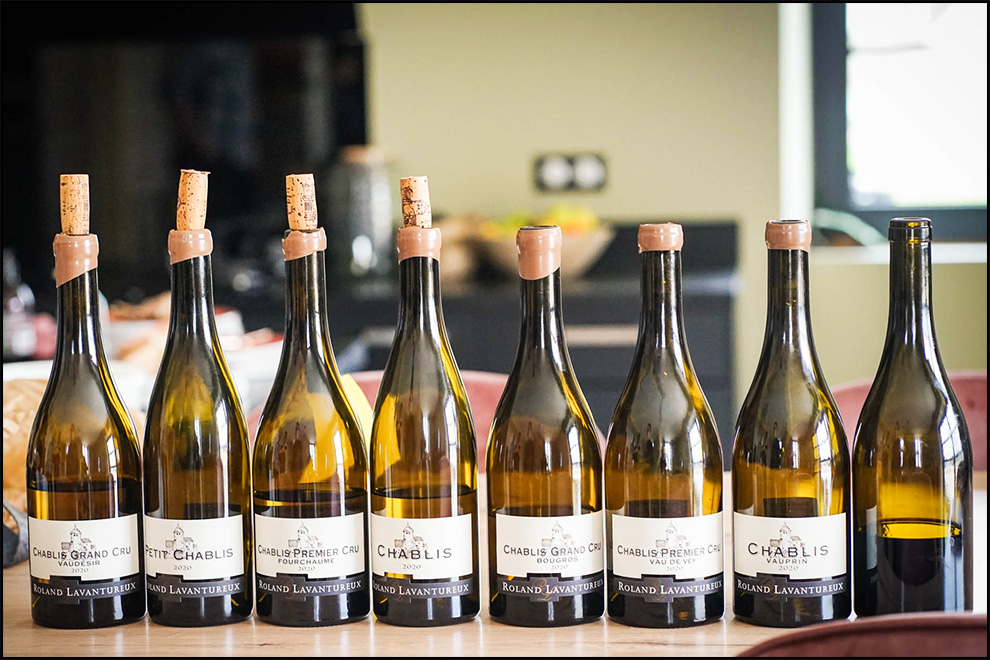 When I first joined the squad at the Berkeley retail shop more than ten years ago, we had only two Lavantureux cuvées to offer: Chablis and Petit Chablis—benchmarks of our Burgundy portfolio since the mid-’80s. Staff and clients alike adored the wines for their reliable consistency from bottle to bottle and year to year, as well as for the unmistakable Chablis character they expressed so vividly.
Soon thereafter—coinciding with founder Roland Lavantureux’s sons, Arnaud and David, joining the domaine—we began to receive new offerings: a few cases of the dense and steely grand cru Vaudésir, then a shipment of charming, perfectly balanced premier cru Fourchaume. The new wines showed off the family’s hunger to fill out their lineup with a diverse collection of more serious and long-lived bottlings, and they also took on levels of depth, complexity, and flavor intensity we had not yet tasted from Lavantureux, without ever losing their Chablisien typicity.
My subsequent tastings at the domaine with Arnaud and David confirmed that they, like their close friends Isabelle and Maxime Raveneau, represent the future of Chablis. Beyond the brilliance of each release—you’ll find layers of elegant fruit, pristine transparency from site to site, and Kimmeridgian minerality in spades in each bottle—it is their humble, studied approach to the craft that is most striking. Their judicious hand with oak aging, or the composed way in which they have dealt with an increasingly capricious climate, sets them apart in Chablis and beyond. The brothers’ new venture with Pinot Noir, which has resulted in a luminous, stony rouge from vines planted by their grandfather in nearby Epineuil, is simply the cherry on top.
The following Lavantureux cuvées have just landed in Berkeley:

Added to Your Favorites Add to Favorites
$31.00

Added to Your Favorites Add to Favorites
$36.00

by Kermit Lynch
In terms of quality, a well-vinified Petit Chablis is preferable to a poorly made Chablis. Don’t let the petit scare you away from th...

by Kermit Lynch
The winemaker is Alain Pascal, a living, breathing hunk of Provence. This 1997 is his domaine’s debut bottling. Alain’s father, who planted t...

by Anthony Lynch
Vigneti Vecchio is one of three small growers we recently introduced from Mount Etna. The name is a reference to the family name of Carmelo Vecch...

May | From the Archives: Confessions of a Water Drinker
June 1996 Newsletter

by Wendell Berry
I had better begin by saying that I am primarily a water drinker. There are many pleasures in drinking water, the chief of which are to be f...

by Dixon Brooke
Daniel Alibrand and his wife, Valérie, are making some of the most exciting wine in Bordeaux today. The fact that all of their wine is white mak...

by Anthony Lynch
It was a swampy summer afternoon in Beaune (yes, it does get hot in Burgundy from time to time) when I first tasted Giulia Negri’s wines. Not t...

by Anthony Lynch
Grottafumata is, in a sense, the antithesis of many of the changes Etna has seen in recent times. As multinational wine brands have settled looking to...