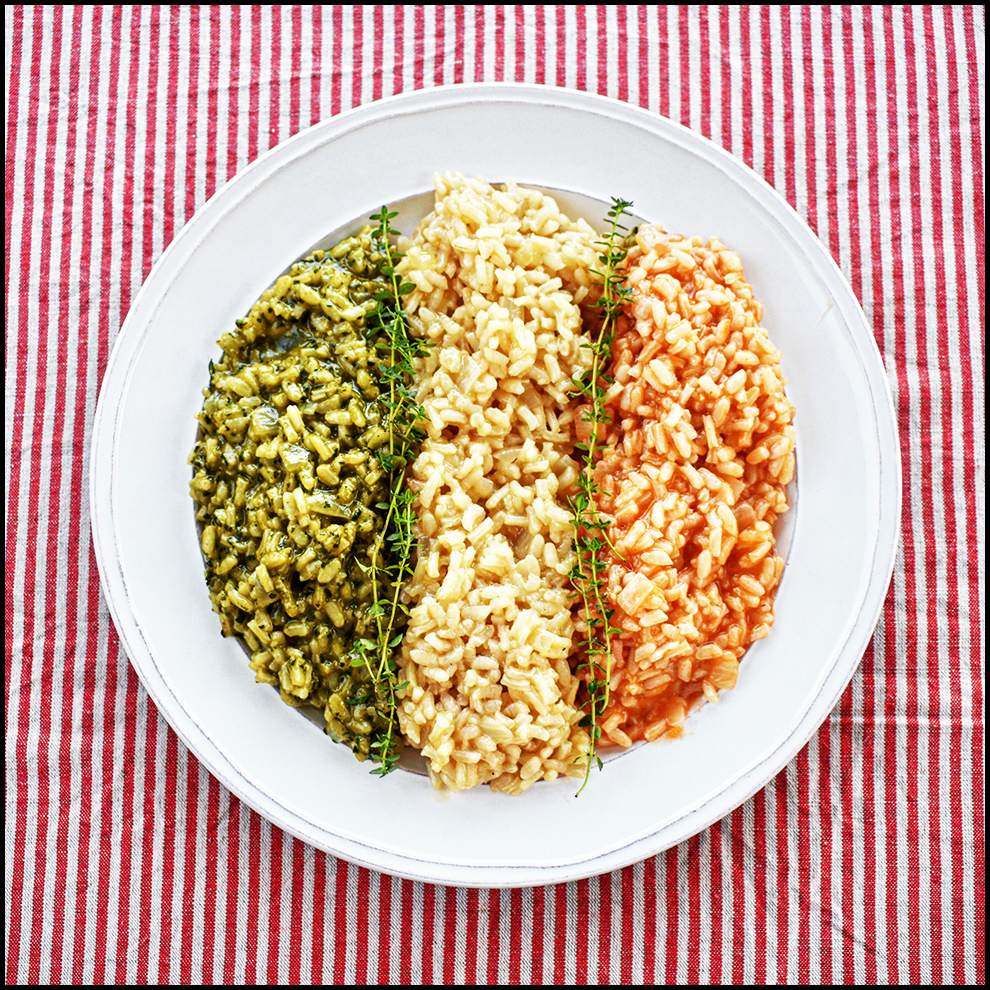 Last winter, I watched the best movie I’ve seen in years. Released in 1996, Big Night is the story of two Italian immigrants—brothers cheekily named Primo and Secondo—who run a struggling restaurant along the Jersey shore in the 1950s. Primo, the stubborn chef played by Tony Shalhoub, has no interest in straying beyond purist Italian cuisine—even if the risotto is time-consuming and margin-diminishing—while Secondo, the maître d’ played by Stanley Tucci, doesn’t mind catering to diners’ wishes of spaghetti and meatballs if doing so pays the bills. Even though Big Night is not holiday-themed, it is, with its many scenes of mouthwatering dishes and merrymaking, a perfect film to watch during the holiday season.
Two-thirds of the way through the film, Primo plates three beautiful and tenderly made risottos, arranged in the colors of the Italian flag. Watching this scene, I couldn’t help but think of Giulia Negri, our newest producer in Piemonte. A few weeks before I watched Big Night, Giulia had sent me her family’s recipe for risotto with orange and fontina, which was so delicious and distinctive I’d already re-created it twice at home. The acidity from the freshly squeezed orange not only served as the perfect foil to the rich flavor and creaminess of the fontina, but also it mirrored the pitch-perfect acidity and blood orange notes of Giulia’s elegant Langhe Nebbiolo.
Five months later, a new convert to the charms of Stanley Tucci, I was watching Searching for Italy, in which he travels across his ancestral home sampling every region’s most iconic and inspired food and wines. Toward the end of the episode, set in Piemonte on a foggy, fall day, Tucci drives up the hill to taste some Barolo. His destination? Giulia Negri’s estate in La Morra. I couldn’t believe it! And how did he choose to visit Giulia, a relative newcomer in what many consider to be Italy’s grandest wine region filled with dozens of generations-old, world-renowned names? Presumably, he was enchanted by the same qualities that first grabbed our attention a few years ago: incredibly elegant, expressive reds made by an intensely curious and intuitive vignaiola from some of Barolo’s most distinctive terroirs.
Surrounded by forests, where her family has hunted truffles for decades, Giulia’s vines are planted at the highest elevation in all of Barolo. Often above the fog line, they benefit from abundant sunshine, refreshing winds, and milder temperatures, which allow her Nebbiolo—a notoriously finicky grape—to ripen more slowly and evenly than at lower, warmer, and more humid sites. Her vineyards are also uniquely situated across an unusual patchwork of soil types, which led Giulia to bottle multiple single-vineyard Baroli, each very different from the next. From soils of clay and marl, La Tartufaia is her most approachable and fruit-driven Barolo, with gentle tannins. And planted in sandier soils two hundred feet higher up the hill, her Serradenari vines yield an earthier, more savory, and more structured Barolo that is charming now and should evolve beautifully over the next decade or two.
If you have not yet experienced the talent and charisma of this rising star in Piemonte, open a bottle of Giulia’s Langhe Nebbiolo or Barolo, make yourself a bone-warming bowl of risotto, and turn on Big Night or Searching for Italy: Piedmont.

Giulia’s recipe for risotto with orange and fontina (serves four): Sauté onions in butter, add two cups Carnaroli or Arborio rice, a splash of white wine, and the juice and zest of one orange. Add six cups of vegetable broth a little at a time. Roughly five minutes before the risotto is done, add fontina gradually, allowing it to melt until the balance of cheese to acidity is right for you!

Added to Your Favorites Add to Favorites
$33.00

Added to Your Favorites Add to Favorites
$73.00

Added to Your Favorites Add to Favorites
$102.00

More from the December 2022 Newsletter

Values of the Month

by Jane Augustine
This month we’ve chosen two wines that are emblematic of our portfolio for different reasons. They are values, but they also exemplify why we love I...

Now through November 30, visit our retail shop or click HERE to take 20% off sparkling wines from Champagne, Alsace, Liguria, the Loire, and...

by Anthony Lynch
Ça morgonne, they say in the Beaujolais, meaning there are those irresistible aromas of sour cherry, violets, and sweet spices . . ....

by Anthony Lynch
Be sure to cool down the bottle a bit before generously splashing this deliciously smooth Provençal juice into your glass...